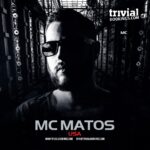 Born in the USA, I moved to Luxembourg at the age of 14. I started writing hip hop texts that I later on recorded with friends.

Through the years I listened to many genres of music, but I got hooked to electronic music especially to techno and hardtechno and became a DJ and currently also producer.

Since 2009 I slipped into the hardcore scene mainly as booker and organizer.

I co-grounded an association Amoksphere Events specialized in organizing parties and festivals representing the harder styles in Luxembourg.

At one party my associate and friend the Bitchripper told me to grab the mic and shout something out during his set. To my surprise the crowd went crazy.

After that party I had such positive feedback that I decided to continue in this direction for another creative challenge.

I've hosted the biggest names in hardcore and hardtechno and I've had bookings at clubs and festivals in France,Belgium,Germany,Holland and Luxembourg (such as This is Hardcore:Rockhal Invasion (lu), Liberty White Chronicles (be), The Qontinent (be), CityParade (be) and Earthquake (de)). I also have some projects where i give my vocals for hardcore and hardtechno tracks.

In search of new challenges i widened my horizons and now also MC at hardtsyle events as well as house events.

Now I signed with Trivialbookings for my HARDTECHO AND TECHNO bookings