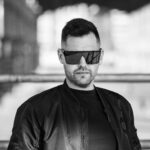 Simone Ciannarella aka Haze-C was born in Genoa (Italy) in 1988. Passionate about electronic music since he was a child, he started young to go in clubs, where he felt that music should become his full time hobby. So he started exploring the world of production with the first professional software, experimenting with hard sounds. He released his first Ep for Technodrome Records. From there other releases for labels such as DOLMA REC, DSR DIGITAL, TRAU-MA, MAD MADE, LEVEL. He performed at the Mantra Club and Casa Mia Club in Genoa, Audiodrome Club (Turin), Depoklub (Croatia-Zagreb), Techno Kultura (Poland-Warsaw) Arzènal (Budapest-Hungary). Currently resident DJ at the azimut club for UNITY (Wired Turin).
He likes to delight dancefloors with his groove-filled Techno/Hardtechno/Schranz sets with a deep, dark timbre