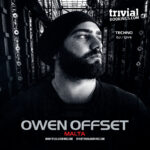 Owen Offset is famous in the island of Malta for his passion for techno music.

This was followed with PLATEN VINYL EP which was issued with Analogue Audio Berlin with remixers Björn Torwellen, Shin Nishimura and Dominik Vaillant which is being supported by international artists Joseph Capriati and Dr. Motte amongst others.

Following his gigs in Holland, Owen Offset signed a contract with CONNECTED agency.
Throughout his DJ career, he has played alongside internal artists Vitalic, and Dave Clarke amongst others.

He was the warm-up DJ for Joey Beltram and David Meiser and Ritzi Lee. The latest album was launched later 2016, with the new EP INHALE and includesremixes from the legends Joey Beltram and Sven Wittekind. Unrealesed upcoming tracks were played at the 2015 edition of Awakenings by respected artists, these tracks will be part of another album that is still to be released on vinyl.