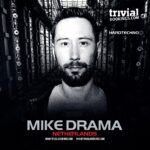 High quality dj sets and strong performances that is what defines the sound of Mike Drama! Self made man Mr. Drama can be seen as one of the most respected top jocks in the hard-techno scene and for many out there no introduction is needed for this stage beast! When the Drama begins, you never know what to expect! Nowadays, the nature of this talented jock’s game is a unique style of energetic hard-techno on 3 decks.

He is always pushing his sets to the limit. His charismatic appearance and excellent performance on stage makes him a crowd killer! Mike combines a number of grooves and manipulates them with breaks and the help of effects; with his fast mixing skills he creates a very energetic atmosphere, which will surely give you the ride of your life! When the Drama is in the house, you are guaranteed of damage on the floor! No matter where he plays, he brings the energy the crowd needs!! He has played on the most respected events like Awakenings, Time Warp, Djax it Up, Heroes of Techno, Ruhr in Love, Decibel, Defqon, Mental Torments Night, Free your mind, Ground Zero and Qbase and many more.

He has also played all around the globe in countries like: Austria, Belgium, Colombia, Germany, Holland, Ireland, Italy, Malta, Poland, Portugal, Spain, Sweden and the United States. Besides his skills as a DJ he is also a very important man behind the curtains. He runs two of the most important hard techno labels, Cannibal Society & Mental Torments records. Together they are worth over 50 vinyl and digital releases. Mike has also been organizing parties since the early 2000 in Holland. Because of all his activities he is a very important factor in the Dutch and worldwide hard techno scene. With all of this he gave many talented and well-known top artists the chance to release on his labels and play at his events.

He gave many artists the opportunity to make their debut in Holland and become a name in the dutch hard-techno scene. This all was probably the main reason why he caught the attention of the legendary Miss Djax. Working on stage with Miss Djax as the MD2 project and being a part of many Djax it Up parties included the important 20th & 25th years anniversary from this legendary label Djax up Beats he stands for professionalism, quality and a high profile stage jockey! For all those who cannot sleep at night.., who can only survive by injecting dangerous drums into their system on a weekly basis –Mental Torments Nights will be your savior !