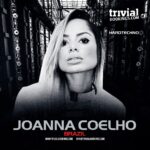 Joanna Coelho was born in the city of Curitiba, in Paraná in southern Brazil. Pretty soon, her interest in electronic music was growing up. With the age of 17 Joanna graduated the "International Academy of Electronic Music" (AIMEC) in Curitiba.

In 2011 she moved to The Netherlands and concluded the Electronic Music Production Course at SAE Rotterdam. By 2014, Joanna already shared consoles with great names of techno and hardtechno such as DJ Rush , Sven Väth, Chris Liebing, Pet Duo, Fatima Hajji, Candy Cox, Svetec, Monster Mush, Alex TB among many others. And after the events in countries such as Argentina, Austria, Belgium, Colombia, Croatia, France, Germany, Ireland, The Netherlands, Portugal, Slovenia, Spain and Venezuela, already more were fixed. Joanna is working hard and seeks to express her skills and personality through her music, bringing a new light into the scene.