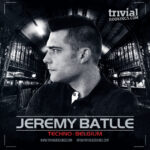 Rocked by the music since his youth, he was passionate of vinyl and turntables.

His passion for djing started in 1998, at the age of 15 he byed his first deck and mixer and started playing electronic music.

Till 2001 till 2004, he played at some parties as his first alias Dj Mush, organized his own parties and also got a club residency at N-Joy Club and Jetset Club in Belgium.

2005 was the year that he change his alias Monster Mush to become producer. He began to produce his own music and released on many labels like “Cannibal Society Records” and “Reconstruction Recordings” from the Netherlands.

In 2008, his remix of Nirvana’s “Smells like teen spirit” was a great success and was played by many top artists like Pet Duo, Greg Notill, O.B.I., TRB, Jason Little, etc... and was played all over the world.

First in Germany, Luxembourg and France, where he played pretty often and soon after, he got gigs in Spain and Portugal too.

His name went around and soon he got bookings at festivals like The Qontinent, Nature One, City Parade and club gigs at Industrial Coopera, Zoreks Club, Blau Club, Torn de Nit, Sala Wow, Club Tunnel. He has supported for many years the Liberty White team, that got him on massive events like their events at Flanders Expo, Waregem Expo and many other festivals in Belgium.

In 2013, he was called to explore a new continent for him, doing a too month tour of South America, playing at events in Colombia, Brazil and Venezuela, where he met many new people, lovers of hard techno music like himself.... It was an amazing time for him and an unbelievable moment in his career...

From 2015 to 2017, Monster Mush focused and learned music production to offer his supporters the best hard techno music as Monster Mush and techno music under his name Jeremy Batlle on ESINE RECORDINGS You can check out all his releases on all main digital platforms and in vinyl distribution shops. as beatport.com on Label references as Intensity Rec, Gnot, Canibal Society, Reconstruction Rec, Subtracktor, TechnoPride Rec, Trivialbookings Rec. Today he is happy to play and present you his new Techno Album