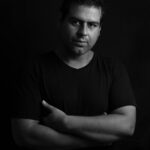 Cristian Salazar, known as Cristian Glitch, Dj / producer, He began his career in 2009.

Owner of a record label, he is characterized by his strong, energetic and solid-based techno style ideal for breaking the dance floors.

He has collaborated with labels from different parts of the world, including Pornographic Recordings (Cristian Varela's label), Dolma Records (DolbyD's label), Naked Lunch (A.paul's label) among others.

He has shared the booth with important international references such as Angy Kore, Flug, Marla Singer and nationals such as Luix Spectrum, Deraout, Magdalena, among others.

His music has reached the charts of renowned international festivals such as Awakenings, Ultra Music festival and played by major names in the scene such as Richie Hawtin, Amelie Lens, Charlotte the Witte, Klaudia Gawlas, Joseph Capriatti, Thomas Schumacher, Slam.

It has been repeatedly featured in the top 100 charts of the TECHNO and HARDTECHNO sections of beatport and other digital platforms.