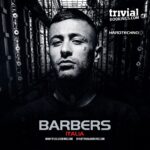 Fabrizio Barberis aka Dj Barbers deejay and producer techno & Hard Techno was born in Sardinia in 1986.

From an early age he cultivated a strong passion for music, but, particularly fascinated by electronic music at the young age of 14, he was mainly interested in techno.

From there, over the years, attending discos and clubs on the island and hearing numerous deejays, he decides to start what is still his path.

In 2005 his first console the first orders of vinyl, and shortly after the first appearances in clubs.

Initially as a resident DJ for Basstation Crew, a well-known Sardinian organization, famous for having brought world-famous deejays of the techno genre to the island, thus creating a solid and rich movement of public.

This was the springboard that led him to perform in front of numerous people who recognized his talent and technique of him.

Over time his passion for music will also lead him into the world of production, where between sofwars and plug-ins he created his driscography with various relegations for various record labels around the world.
From here on, thanks also to his poductions, he performed for various Italian and European organizations up to South America with appearances at important events and festivals, alongside deejays of depth that he always supported as a young man.

Here the Italian cities in which he performed: Naples, Caserta, Milan, Bologna, Foggia, Florence and throughout Sardinia.

A project that was born to give an alternative to the Sardinian public, offering high-level parties, with international artists accompanied by the new hard techno islanders.

To consolidate everything, Dj Barbers also opens 3 labels, one with the name of Hardtstation Records which currently owns 12 releases and subsequently a BRS tracks call exclusive only for its productions, while the last one founded in 2015 in collaboration with a young Sardinian producer called Interception Records.

Currently Fabrizio Barberis aka Dj Barbers, offers his audience a dj set with a high level technique, a dj set that varies according to the project he presents. If he performs as a DJ Barbers it will surely be a Hardtechno session which can range from 150bpm to 160bpm. On the contrary, if he presents himself with his real name Fabrizio Barberis will offer you a Techno DJ set that runs around 127bpm with softer sounds.