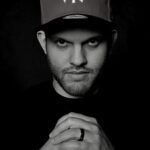 Roberto Yriarte a.k.a. Bamb was born in Venezuela, nowadays is living in Barcelona (ES).

As a Dj, his sets are always dynamic, with an accuarate musical selection using the Scratch to create a different style from the rest of the artists.

As a producer, Bamb builds strong and energetic sounds with a powerful bassline which combines ideally with vocals and groovy rythms.

In addition to his musical role, Bamb is also the founder of ArkTek an underground movement whose he has as mission: Preserves the cultural essence Techno & Hard Techno in the European scene Starting 2016 Bamb begins to be part of a large German project called Harter Modus by Tekkerkane & Mustec who create a group of residents Djs composed by Malke, Greg Notill and many more artists.

He has also shared line up with big names of the scene in many countries like Brazil, Colombia, Spain, Italy, Portugal, Germany and Slovenia.